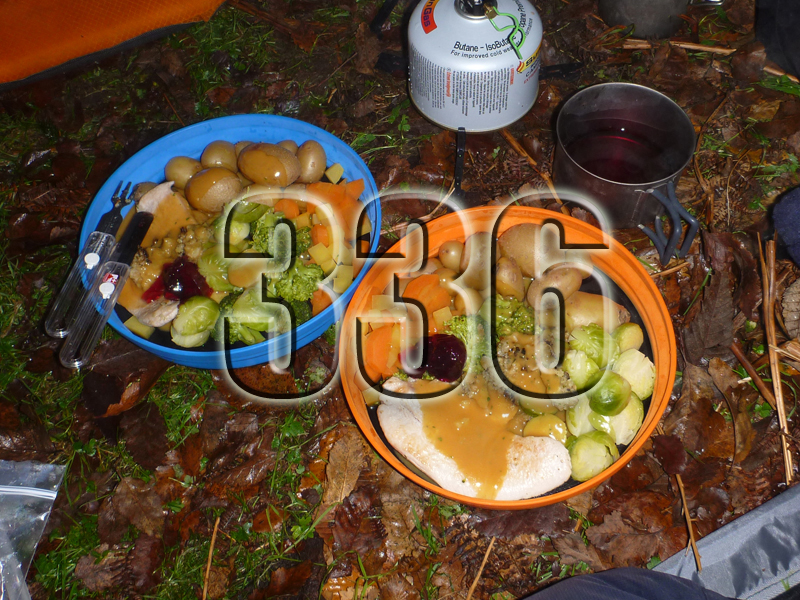 Is it possible to cook a ‘real’ three course Christmas meal under a shelter, in a storm, in December, in Wales?

Well the answer is an emphatic ‘yes’!

Truthfully, there were a few extra influences which I hadn’t really considered as I planned with military precision, my cooking techniques while sitting in a nice warm office. Namely that the weather conditions on that particular night, in that particular place could just be the worst of the year. 60 mph winds, heavy rain throughout the night and sub zero temperatures were forecast as the day drew near. Of course, if you are going to be doing any wild camping and cooking during December in Wales, you would have thought I would have taken that into account, like any sensible person? Well I did, I just didn’t expect to be cooking with one hand, as the other was occupied holding the tent down most of the evening!

So how did this come about? Andy Howell, my friend and trusty part time contributor to the Podcasts called me a few weeks ago and said that we hadn’t had our promised Big Day Out trip during 2011 and it was about time we did something. Conversation flowed and looking back on it,  ideas got expanded far too quickly. Before I knew it I had suggested that it was only right and proper that we should have our Christmas party, wild camping in Wales and cook a three course meal in the process. Andy, having a modicum of sharper wits about him, told me he was ‘far too busy’ to plan much so he would leave it all to me! A sharp move, now I come to think about it!

Although as we were going to be eating ‘real fresh’ food, the trip was still intended to be fairly ‘light’, and we set ourselves the tasks of using our normal lightweight gear to transport and camp as per normal. As such, I worked on using two gas stoves and relying on Pot Cosy systems to keep the food cooking as I moved ‘Jamie’ style from one pot to the other.

This is how I did it;

Started with a small plastic bottle of Sloe Gin and a Mince Pie. Well we had to eat something, just in case the rest was a disaster!

While we were doing that, in a 750ml tall Titanium pot I boiled 650ml of water.

Once boiling, I poured 280ml each into two X-Mugs which contained the Heinz Tomato and Basil ‘Soup in a tube’. Stirred well with a mini whisk (A godsend) and added freshly chopped Parsley which I prepared the previous evening from a small piece of tin foil.

The pot with the remaining water was then placed back on the boil and I dropped in a small piece of Super Thin Windshield, which was about 2cm x 10cm and rolled into a small tube, slightly uncoiled. This acted as a small trivet inside the pot, so I could drop the two mini Christmas Puddings inside, one on top of the other and they were kept off the direct heat.

This boiled away as we enjoyed the soup. As we finished and put the bowls to one side, I lifted the 750ml pot into a double Pot Cosy, and set it to one side.

Then in a Evernew 1300ml wide pan, I placed all the small potatoes I could find at home to fill two fat bellies, and just covered them with water. Bring this to a boil and then a simmer for about 10 minutes while we chatted. I tested them to make sure they were just starting to cook and them placed the whole pot into another double Pot Cosy.

As I did so, on went the veg in an Evenew 900ml pan, which consisted of, finely chopped carrot and swede (prepared at home and placed in a plastic bag), calabrese (a selection of smaller pieces also in a bag) and of course sprouts (although peeled at home, I chopped them in half as I placed them into the pot) All these veg were kept apart from each other by another offset of Super Thin Windshield, which was cut 7cm x 20cm and this was folded to form a colander. (See photos)

Again they were brought to the boil and simmered for about 5 minutes, until they just started to cook through. Once again they were placed into a double Pot Cosy and set to one side.

Now onto the main event. Two 6mm slices of Turkey Breast were placed with a bit of oil, into an Evernew Titanium Frying Pan and there was just enough space to place two little patties of Lemon Stuffing which I had prepared the night before and put into grease proof paper.

This cooked beautifully on both sides and was just browning nicely, so it was time to serve.

I drained some of the water from the Potatoes into one of the X-Mugs to swill out the remnants of tomato soup. Then I dropped in a packet of Turkey Gravy mix, adding a bit more of the hot water to make it up. As the water was still off the boil, it thickened immediately and was ready to serve.

And so, onto two X-Plates, I forked out the potatoes leaving the water in the pan and placed it back into the cosy. (For washing up later). Then the veg in the same way, followed by the Turkey and stuffing. To top it off a blob of cranberry sauce from a small Nalgene container, before pouring the gravy all over.

It looked the business, smelled fantastic and best of all was truly perfectly cooked. It helped of course to have a nice Merlot which was poured from a Platy Perserve to accompany the dish.

Once these plates were as clean as the Sporks could make them, I removed the Christmas Pudding from the Cosy and they slid out, perfectly heated through, steaming slightly. From another small Nalgene container, I added a blob of Brandy Butter (prepared the previous evening) and from the smallest bottle in my collection a dribble of fresh Brandy was poured over the top. Sadly, probably due to the cold weather, I couldn’t get this to light, and this was the only failure of the meal.

However it tasted great, and this too was eaten completely before we started on the After Eight mints and a GSI Hip Flask of Bruchladdie 12 year old Malt.

While this was going on, I put a small squirt of the environmentally friendly washing up liquid into the X-Mug, X-Plates and Frying Pan and poured in the remaining very warm water to swill them and soak the pan.

If you listen to the Podcasts you’ll hear exactly how it was done and the conditions it was done in. The Pot Cosy really proves itself once again as being a vital part of the cooking system.

As you can see, I could have managed all this on one gas burner. I did use two, but never had both of them going at the same time I think. Incredible when you think about it!

So after this we naturally headed off to bed, at the very impressive time of 7pm. Sleep was interrupted on a fairly regular basis throughout the night by the wind we could hear approaching all through the valley. The rush and the roar was like an approaching train and more than once I reached out to grab the pole, which at one point was flexing. Thankfully in the morning, the weather was kinder to us as we slowly came round and inspected the ice which had formed around each shelter. No damage was found, and the rain held off as we patiently waited for the sun beams to reach us, as the sun rose.

While this was going on, I took the relatively clean plates and pans down the stream for a quick swill, but they didn’t really need it. Once back in the shelter I was ready for my next meal, fresh pancakes!

I emptied into the Evernew 900ml Pan, a packet of pancake mix, 300ml of water and a single egg which I had transported in a double egg carrier. Using the mini whisk, I spent a few minutes beating this into a smooth mix, getting lots of air into the creamy mixture.

Titanium transfers heat directly through the material and doesn’t spread much, unlike Aluminium. Therefore the trick when cooking Pancakes is to keep moving the pan and trying to not have a hot spot in the middle. It is also vital to keep a close eye on the oil, as it could ignite if the burner is too high. Of course with the burners like the Crux Stove and Peak Ignition as used, they are designed to output effective high heat, so it was a bit of a juggle as you might imagine!

However, once I felt the heat was just right I proceeded to cook four thick pancakes. I even managed to flip one of them in the space permitted. The only extra I had completely forgotten was a lemon, or lemon juice and sugar. So as good as they were, they were missing a little sweetness.

After all this we packed up, and slowly made our way back along the valley to our car. The weather was in complete contrast to the previous afternoon, a perfect sunny winters day. No wind, no rain, just glorious autumnal sunshine and colour. But a terrific 24 hours refreshing the mind, body and soul, and certainly a glowing feeling knowing that such an extensive meal could be cooked using the simplest of tools and a bit of logic.

Warning …..
It is never advised to cook inside a silicone shelter due to the danger of fire and fumes. However under the circumstances we had no choice. Thankfully the prototype shelter had plenty of room for the two of us to both sit, and cook with lots of headroom above the stoves. There was plenty of ventilation at the top of the shelter added to which, the high winds provided more than enough through ventilation. The only down side from this exercise is the lingering smell of cooking which even after airing the tent for 2 days, is still obvious!

So there it is readers and listeners. Merry Christmas to you all and many, many thanks for all your support and encouragement this year. I hope you like the new website and look forward to producing many more informative and fun programs in 2012.

2 Heinz Soup in a tube
Parsley chopped in foil

GSI 10floz Hip Flask Whisky
Platy Preserve with a bottle of Merlot inside it!

6 After Eight Mints
6 Other chocolates