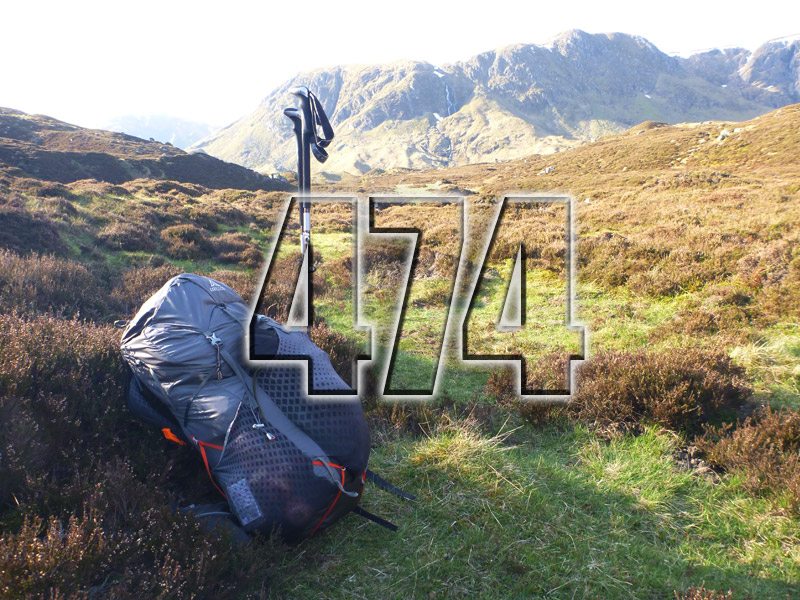 After a reasonable nights sleep in Braemar we had breakfast in the cafe, before meeting up with Lee and Tony and heading for Loch Callater Lodge.

A slow start to the day with strong blustery winds and dark clouds looking over us. But this was all soon forgotten with the warm welcome at the lodge, and the hot cup of tea which was eagerly thrust into our hands.

Tempting as it was to stay we continued along the length of Glen Callater along to Jocks Rd at the base of the climb, where the wind was certainly picking up and making us all think that going over the top would be plain hard work and not much pleasure, so we all agreed to pitch amongst the dips and embankments along the twisting stream, and hunker down out of the wind for the afternoon.

This was the one time that I found the footprint of the Luxe F6 to be too much. The others who were using the Notch, an MSR and a Force 10 shelters were long and narrow and so were able to ‘slot’ nicely into little groves between the heather and rocks which were liberally scattered around after the winter snow.

The large hexagonal footprint meant I could only get half the pegs in as deep as I would like. Some were caught in heather and ultimately it meant that with every heavy gust, there was more movement in the material and the pole shifted slightly, so I spent the afternoon holding on just in case.

I needn’t have worried after all, but when there’s nothing else to do apart from doze, it does play on your mind. The weather was bizarre, boiling hot at times, high winds and then a quick squall of rain. The humidity rose to high levels and made sleeping difficult. However after a few brews and a long leisurely meal, sleep finally came.

The following day started dull but then became a quality days walking. Breezy and clear and with a hint of sunshine we made our way up the climb at Jocks Road and headed off past Loch Esk, where we originally planned to camp. We were all glad we didn’t as it was nothing but bog and stone, with nowhere offering dry seclusion from the weather. So maybe that was for the best after all.

Continuing on we took the establish land rover track above Loch Muick which provided us with wonderful landscape views looking down on Dubh Loch and Glas Alt Shiel. Many times I have been walking past the bothy there and looking up to this spot, wondering if there was a path. Well there is and a good one at that!

From there it continues as you might think to the Information centre (Coffee machine inside and Loos nearby) before taking the established route to the bothy at the Shielin of Mark. The weather suddenly came in and after such a leisurely day, it was a shame to have to rush to pitch the tents and dive in. However once we were in that is where we stayed and took our time to settle into our last wild camp and meal of the journey.

The following day started very cold and overcast. There was a reluctance to get moving, but as I had had a terrible nights sleep unable to find a limp free area to sleep on, I wanted to get going and blow away the dark mood which was upon me.

A few hours later we trotted into Tarfside and with moments of devouring a couple of bacon sandwiches and a few mugs of tea, all was right again with the world. As always there was good banter and lively conversation from all the challengers around the table and in the lounge. Everyone having stories to excite the others, but we all knew this was the beginning of the end.

Down on the campsite at the sports field, I bumped into Craig and Vicky Gulley from St Louis, Missouri. Two people I had been in correspondence with via email related to past Podcasts, but this was the first in person. So we stood and had a good chat about their experience and how past podcasts had helped them prepare for their first crossing a few years back.

Then naturally with everything washed, clothes dried, shelters pitched the Mason’s Arms was calling. Once again the warm welcome at Tarfside provided a glow which enabled us all to get a deep nights sleep.