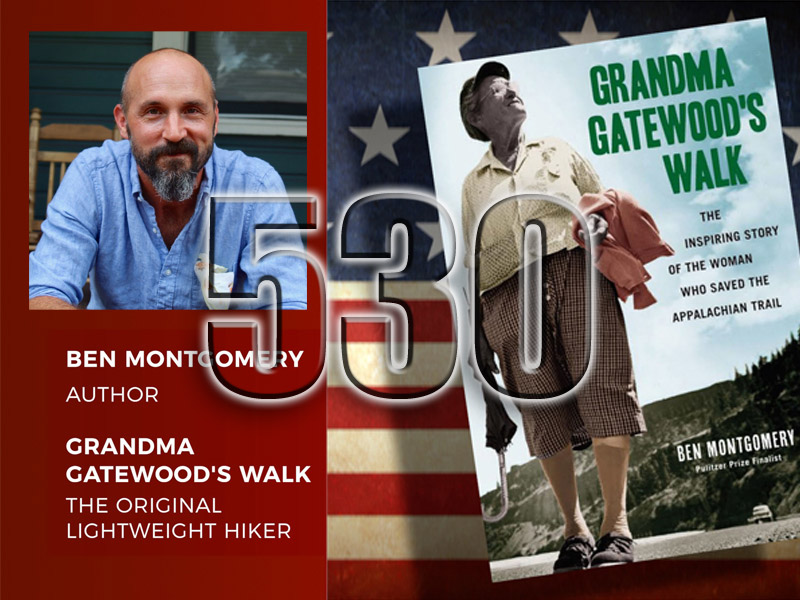 This is a part one of a two part interview with the author of Grandma Gatewood’s Walk.

The book is a New York Times best seller and writer Ben Montgomery was a Pulitzer Prize finalist in 2010.

Part one covers her younger history, the life and times she lived through in the early 1950’s, the abuse she suffered for 30 years and her discovery of the Appalachian Trail, before setting foot in it initially in 1954.

We all know the basic story, that in 1955 67 year old Grandma Gatewood set off on a remarkable journey, to accidentally become the first woman to walk the entire 2050 miles in 145 days of the Appalachian Trail.

Today her name is iconic within the lightweight backpacking community, as she carried only 15 pounds of supplies and a tiny amount of food in a simple knapsack, hiking in sneakers, sleeping under a shower curtain and living off the land.

Not only that, she did again 2 years later, followed by the Oregon Trail then aged 71.

This audio is an extract from the video live stream (which can be found on YouTube) I broadcast recently with the author Ben Montgomery who found that Grandma Gatewood was his Mother’s Great Aunt.

In it you’ll hear previously unearthed stories about this amazing woman, her diaries, her gritty life and what led her to set off on the trail all of which can be found in his fascinating biography – Grandma Gatewoods Walk.

The documentary of her life made by Eden Valley Enterprises “Trail Magic -The Grandma Gatewood Story” can be streamed or purchased here.

Part two concludes with a few stories from the trail, her subsequent fame and celebrity status and how she became the iconic ambassador for walking with her name and legacy living on.