Any feeling of guilt I may have had when lying in that deep, deep bath laced with Lavender infused essence and other exotic herbal remedies soon evaporated as I listened to the rain pour non-stop throughout the night, stopping just in time for breakfast.

There was no rush now with only 18 miles to go, especially as I had to fit in another wild camp somewhere before the coast, so I took my time getting up, packing and then re-packing my now dry, gear, socks and undies before heading down for breakfast. The selection on offer easily matched the meals of yesterday so I was spoiled for choice. They really know how to make a guest feel welcome.

But the time had come to start meandering along the riverside path, so I headed out around 10 trying not to build my speed up to soon and keep below a gentle saunter.

The large flat-ish field below the Tarr Farm Steps pub where they allow you to camp, is right alongside the river and would be wonderful in the right weather. However after the deluge of the night before every slight dip in the land was full to the brim with 2 to 3 inches of rain water. So it wouldn’t have been a good night under a tarp methinks.

The walk alongside the river, took in a few fields and various woods where the thick wet slippery roots could catch you out so attention was required. The sun managed to break through a few times and so many shades of bright green created a tunnel of branches hanging over the fast flowing water.

I wandered into Withypool around midday. Past a couple of pubs doing good trade, past a few houses down towards the bridge. Too early to stop and camp, but I asked the question anyway at the local shop. He informed I could camp on his front lawn if I so wished, which was directly opposite the cafe run by his wife, but unfortunately adjacent to the main road and on rather open view. I thanked him all the same, but maybe something for future travelers to consider. 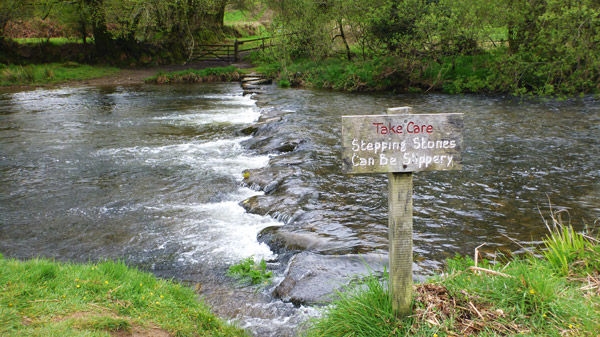 However the cafe presented everything a backpacker could want. Scrummy hot food, lashings of tea, thick chunks of cake, deep leather seats, a loo and wi-fi. So with no other reason to move on, I sat, I ate, I listened to the conversations of others, I read all the periodicals, I ate some more and as I couldn’t think of any more excuses I finally headed out of the door.

To be met by my first fellow 2MW backpackers! Caroline and Pete had decided to do this walk at very short notice and so had stuffed their two 65 lt rucksacks to the brim, including a tent each (they were married!) with everything you might need and dragged their little Cocker Spaniel along. The had started a couple of days before me in the heat and had almost given in, due to the weight and everything that goes with it. I think his was 23kg. Blimey!

I left them to a well earned cuppa and continued on across the escarpment hoping that a wooded section I saw on the map would offer a super little last camp spot, as it was right by the river and well off the beaten track. However it was not to be. The wooded area had been completely decimated and cut back for logging I presume. So I continued on to the next promising spot, a beach at the curve of the river, off from the path once again with overhanging trees for cover.

The sun was by now sharing the heat a plenty and this was a perfect spot. The beach was two tiered down to the water, tucked behind a low moss covered wall. However, sadly the beach was all shale. There was nowhere for pegs to grip and the surface was brittle, so uncomfortable to rest upon. However I found a large flat stone on which to ponder scouring the map for anything else before Simonsbath.

Caroline and Pete had mentioned that they had similar camping issues as me, so had thought to phone ahead to the Simonsbath pub a couple of days earlier. The landlord has stated they were welcome to camp on the garden, so that was a final option.

I was sitting in the sun looking at the last spot which offered a pitch when they came up beside me. They too were looking at the same ground and between us, we talked ourselves out of it and decided that the pub at Simonsbath was probably the better option. Mainly because Pete and I wanted a pint to celebrate the walk. 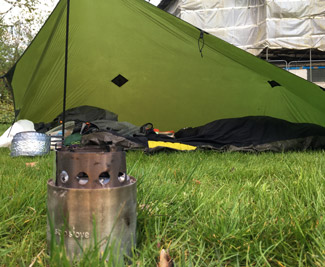 We arrived just before the advertised opening time of 5pm. There was already a group of 15 or so thirsty walkers sitting in the garden who had set out on the 2MW from Lynmouth that morning, eager for a drink and hungry too. They had been there a short while and said that someone had shouted something from one of the upstairs windows Basel Fawlty style, but didn’t elaborate. So we waited and chatted and waited. Then two cars turned up, knocked at the door and waited. And then another.

By 5.30 we had all got the hint and the cars headed off elsewhere, the walkers had slowly moved on and we headed around the corner to a section of flat ground by the public loos and car park.

Which all worked out rather well as it happens. It offer a good flat dry pitch for the night so we cooked and retired to bed.

We never found out why the pub didn’t open that night. 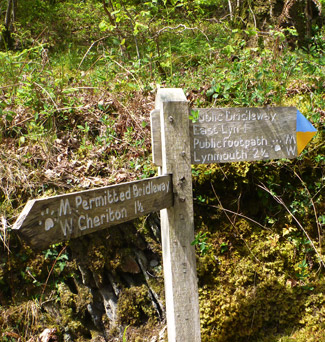 I was up with the larks the next day and the weather looked promising. We kept each other company talking of this and that, and enjoyed the last ramble across Exmoor. Talking so much as one point that we wandered off track and the GPS was put to good use.

The final walk above Myrtleberry Cleave took us round to the open vista of Lynmouth and the sea beyond. It was a warm, calm day and the sea mist merged the shimmering water with the sky so there was no horizon in sight.

At the point where the path starts to descent to Lynmouth we missed a trick. I had been here a year ago and I knew that a few hundred meters past this point, there was a path to three very important places which would have made a big difference that afternoon. A great campsite, and excellent pub and a hotel. What we should have done was dumped our bags there and then wandered down to Lynmouth.

However we chose to continue down to the town and with every step the packs seemed to get heavier and our legs wearier. So much so that our only thoughts were of the dreaded climb back up. 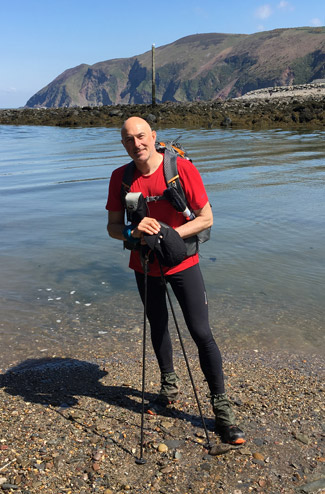 But of course, once we were by the sea, listening to the water lapping the marina and munching on Pasties and Chips, all of this had been forgotten.

A visit to the Exmoor Park Tourist shop to sign the book, which indicated that some 200 people a year do this walk and then it was decided a celebration was called for, but we wisely decided only after we had climbed back up that hill.

Ah and that was the issue. No buses for hours, so a taxi was called and that night we dined in comfort, drank to top up our hydration and slept like a log dreaming of Devon’s charming places, quirky paths, overgrown embankments and hard to come by campsites.