Apart from the boy racer who seemed to feel obligated to ride up and down the main road next to Lake View Fishery at least a dozen times in succession at midnight last night, I slept reasonably well and woke early to an overcast damp day.

However as I had carried all this fuel with me, I got the solo stove going and had the first proper warming brew of the trip closely followed by a bowl full of porridge. During this time there was a sudden downpour and due to my tarp layout this meant the exposed half of my bivvy bag took the full deluge. Although not an issue from the comfort point of view, it did make me realize after it had passed, that I would be packing away sodden gear which wouldn’t have a chance to dry before nightfall. We will have to wait and see.

So I was on the road just after 7am ultimately heading for Knowstone taking in Morchard Bishop Washford Pyne and Witheridge on route. 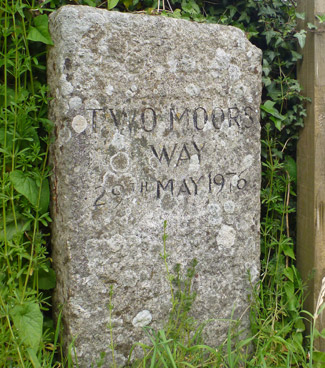 When I had initially purchased the two maps I was using for reference last year at the Exmoor Park centre in Lynmouth I did recall the sales person telling me he had done the trip a few years back and the middle section between Dartmoor and Exmoor had come as a pleasant surprise. Looking at the maps and guidebook I suspected this section was going to be boring and so I had mentally prepared myself to ‘push on’ as much as possible to get it over with in haste.

However, reflecting on this trip as I listen to my recordings and view the pictures and video, this really was a shame, as aside from a couple of really commercial contract farming land owners, the route was nothing but charming. With every turn, or over every style, I was presented with a beautiful gentle rolling landscape. A patch work tapestry of yellow rape fields and crops rolling away from me like a fairy tale storybook.

This isn’t forgetting the tunnels of hazel on the old drovers roads or green lanes which were carpeted with wild garlic and bluebells.

Yes I seriously misjudged the pleasure this section would offer and if I had made some sensible decisions, a shorter day on either day 4 or 5 would have stopped my early arrival at Lynmouth and increased the duration of the experience more.

With careful planning one campsite right on the path which I came across at midday, could have offered an interesting rest and diversion.  Acorns Naturist Retreat is a nudest campsite offering camping for backpackers, caravans or other accommodation, with all the associated washing and shop facilities. It was at a lovely spot too, so if you are ever passing and need to wash your gear but have literally ‘nothing’ clean to wear to the bar, no one will care!

Crossing Knowstone Moor brought me once again in contact with the roar of the A361, a busy artery taking a steady stream of cars to and from Cornwall. It seemed a big intrusion to my thoughts and I was glad to pass under it on the way to Knowstone proper. I was imagining another cute village, thatched cottages and the farm which offered camping just a short walk away from the pub.

Well the village was very cute and the Michelin one star 13th-century pub with a beamed bar and frescoed restaurant serving gourmet British/French dishes did look welcoming on that sunny afternoon. However they were closed when I arrived and so that cold Cider I had been dreaming about would have to wait.

I had found the West Kidland Farm website offering camping and facilities the day before when I was waiting for food in the Devonshire Dumpling and it looked very promising offering all kinds of luxury and fresh farm produce. All the time during the long, long, looooong walk from Knowstone I was imagining cooking up a lush bbq on this sunny evening, chilling out in the sunshine, drying off my gear surrounded by the peace and quiet that only farm life can bring. At the end of a 19 mile day, that would have just been perfect.

I should have heard the alarm bells ringing when I was greeted with ‘oh I’ve been trying to take the old website down for a couple of years’. And in those couple of years the romantic image which the website alluded to has been replaced by a tired single female farmer who is just managing to hold things together. The glamping had long gone, the washing and showering facilities have been replaced by a tap in the farm yard and the toilet was nowhere to be seen. So I would have to share the loo in her mobile home. A place which was also home to her pack of 7 dogs.

It was a sorry tale of a relationship breakdown and the resulting damage often caused. Initially I was offered the sloping field right next to the roaring A361 which didn’t appeal, then various plots around the farm until finally settling for a tatty bedroom in the mobile home which was once used by farm workers. It would have to do, as by this time I had realized my sleeping gear was still soaked and my options had narrowed. So I put it out to dry as I cooked my food in the barn.

The only downside to this accommodation was the fact I was sharing it with 30 odd chickens and cockerels. So an early morning call was surely guaranteed!