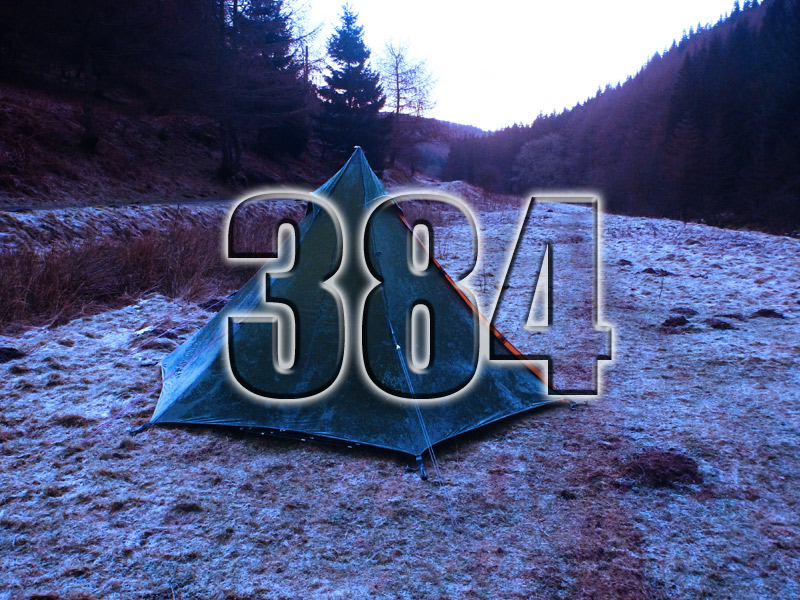 Please note: Kit lists and any additional information located at end of this piece.

On this Wild Camp Rose joined me along with our young Springer Spaniel ‘Pip’ as we headed off to Llantony Priory which is located near Abergavenny.

It is a magnificent place, not only due to the impressive remains which still tower over the landscape with authority and dominance, but also to exist in such a remote location where surely life must have been tough and hard work.

We parked at the Priory and decided as the weather was cold, but clear to head up the hills and get started and save the historical exploration of the Priory for the following day.

But the time we got up the gully to the stone cairn, the weather has decided to give us the usual wet Wales welcome and proceeded to horizontally launch snow, hail, sleet and glorious sunshine at us in no particular order.

As this was Pips first time in the hills we were worried she might wander too far so we kept her close and Rose decided to tie her on, which gave her the added advantage of speed Husky style.

Pip was in her element and whenever we stopped she would dive, roll, scratch and wiggle about on the snow like it was some kind of exotic massage machine. She was seriously in love with the stuff.

We made it to the reservoir where there’s a small 3 man bothy but before we got there, another group of wild campers hoping to spend the night in the area informed us of the situation, and they too decided to head further down the next valley to a well known camping spot.

Although we tried to find an area small enough for the WickiUp 3, the horizontal wind and sodden ground, meant we kept pushing forward. So much so I once again worried that we could be pitching up late and in the dark.

We wandered down the valley, stopping at every possible camping spot or plateau which looked like it would offer a reasonable night. However it was either a sodden mass underfoot or hardcore under the thin grass covering no doubt from the damn construction, so we carried on as the light started to dwindle. 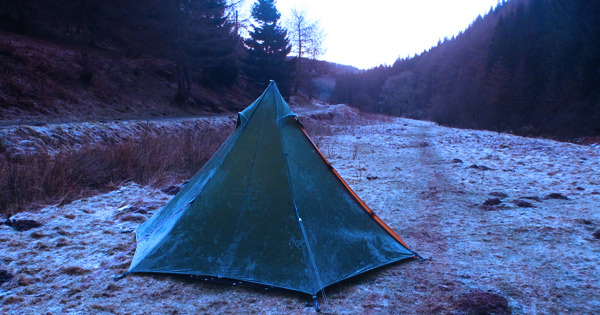 We finally caught up with the other wild campers and shared the last part of the journey with them as they recommended a spot not far from the car parking area, which they new to be the easiest and simplest place to stay. 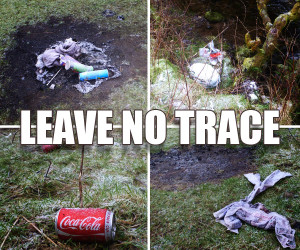 Sadly this lovely little place, has obviously been terribly abused over the years as the fire damage, litter and party left overs indicated. Nothing worse than the detritus of a social event still lingering on after months and letting everyone know that the people who came, partied and camped just didn’t care about the place.

Pip was by now shivering uncontrollably and we made it a priority to get her dried off as best we could, and wrapped up with her new coat on, underneath the Thermatex blanket. We thought she would be knackered and out for the count, however once she warmed up she still managed to take interest in her food before bunking back down once again.

She looked happy enough and although curled up nicely, she was alert for any unfamiliar noise, voice or animal call, trying once or twice to burrow under the side of the tent to get a better look. We have had a Spaniel before, but she really does have a much more inquisitive nature than most and gets totally focused on distant sounds and objects. It must be the gun dog nature she’s inherited from her mum.

The temperature during the night dropped to around -4C, although the forecast was -2C which resulted in some of the dog food and water bottle freezing solid. The only thing I saw during the night from Rose was her nose which poked out through the gap in her bivvy. She had everything on and still felt cold. 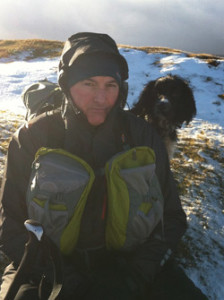 I was similar, but somehow didn’t feel it the same as her which was probably a good things as Pip showed shivering signs of being chilled during the early part of the morning, so I slept half in, half out of my bag while I wrapped her up in my arms like a big silver shopping bag and shared my body heat. It did the trick and she settled as best she could.

In the morning we just had a hot chocolate, some munchies, fed Pip and wanted to get moving as soon as we could, to generate some body heat. The weather started to repeat the pattern of the previous day, with more snow and horizontal sleet. We wanted to practice some navigation skills on the way so the weather, although unwelcome, highlighted a few of our weaker areas and made us focus on pacing and bearings with more accuracy. Something which is easily passed over on a nice sunny day!

Once back at the top, there was only time to stop for a couple of photos, before heading down the gulley to the Priory and the car. The rain followed us down and we decided it was better to get Pip dry and in the car while I rushed around the Priory to snatch a few photos to assist with the story here.

I had been sent a Aarn Featherlite Freedom pack to test and consider for our backpackinglight shop. I made no secret of my bias about them when I met Aarn at the Trade Show. However as the say, the proof of the pudding is in the eating, so what better occasion to try one out. My review is on the Podcast and the bottom line is that although, very comfortable and excellent at carrying a more balanced weight, I found so many little niggling features which just didn’t work for me and my style of backpacking. Looking back at the pictures too I just don’t like the way it looks – but that is purely the ‘poseur’ in me 🙂

Llanthony Priory was one of the earliest houses of Augustinian canons to be founded in Britain, and is one of only a handful in Wales. It is chiefly famous today for its wild and beautiful setting, far up the Vale of Ewyas in the Black Mountains. It was the priory’s remoteness in the Welsh hills which was its undoing, however, making it vulnerable to attack. Giraldus Cambrensis described it, in the late 12th century, as being ‘fixed amongst a barbarous people’. 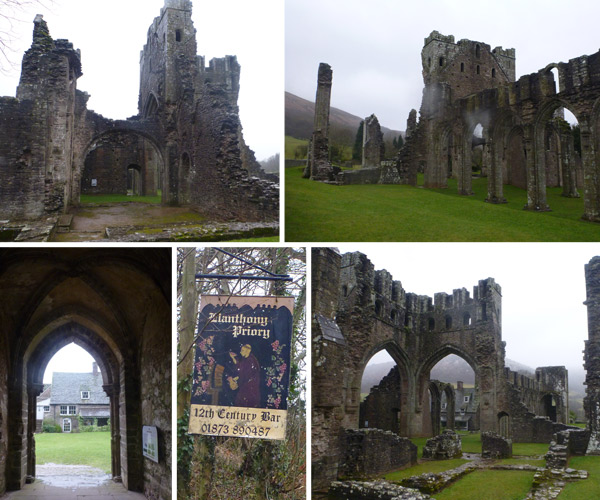 William de Lacy, a knight in the service of Hugh de Lacy, is said to have chosen the spot while out hunting, when he sheltered in a chapel there dedicated to St David. Very quickly a church was established, dedicated to John the Baptist, and it was reorganized as a priory in about 1118. Hugh de Lacy, who had assumed the patronage, endowed it with land, and it soon became famous, enjoyed royal patronage and received many visitors. There were 40 canons in residence, but in about 1135 the ‘barbarous people’ forced a retreat to Hereford and Gloucester. Of this first priory nothing remains. Peace and renewed endowment by the de Lacy family brought canons back from Gloucester and ushered in a great rebuilding phase. It is the remains of this phase that can be seen today.

Much more can be found here.