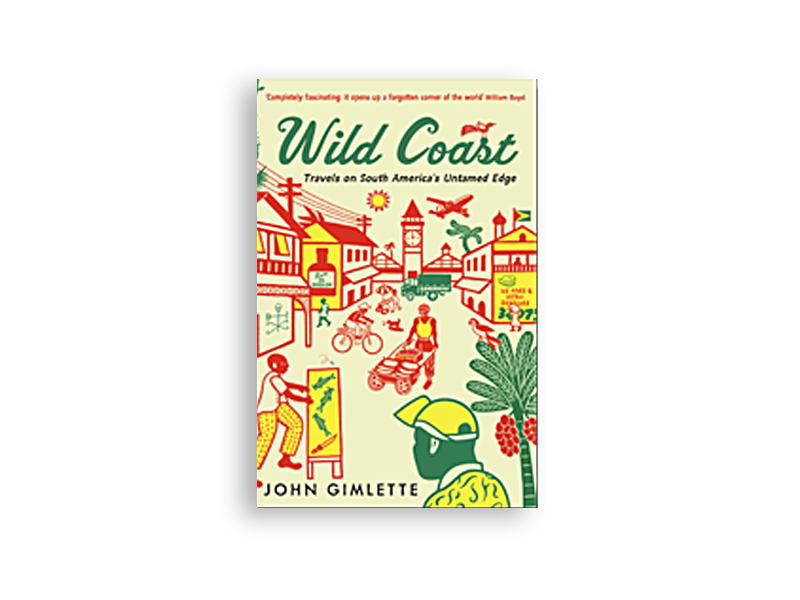 John Gimlette is a new name to me; I have Amazon’s recommendation system for discovering him. ‘The Wild Coast’ is one of those wonderful travel books that makes its focus on of the globe’s backwaters.

‘The Wild Coast’ is the story of travels in Guiana — the Land of Many Waters — named by local Amerindians. Guiana has 900 miles of muddy coastline and no natural ports. 80% of the land is covered by rainforest. According to Gimlette “… nowhere in South America is quite like it”.

Today Guiana,as a result of Colonialism is three different but connected territories: the ex-British colony of Guyana; the ex Dutch colony of Suriname; and French Guiana which is still part of France — Guiana still has members sitting in the French National Assembly.

Gimlette travels around each of the territories, through the fading colonial capitals and the marginal towns and cities on the edge of forests. He takes trips into the jungle and revisits a whole series of past projects aimed at levering, largely, mythical riches.

As an explorer and a writer gimlet serves us well. He is historical briefing is fascinating without getting in the way of the story. The people he meets along the way – who provide hospitality and who look after him on his travels — are affectionately remembered.

Guiana may be a backwater but, as an explorer, Gimlette was following is the footsteps of a number of illustrious predecessors, including Walter Raleigh, Evelyn Waugh and V.S. Naipaul. We learn much from the lives and experiences of these explorers.

The towns seem like almost any you can come across in South America, except more marginal. The forest — at times — has an almost ‘Heart of Darkness’ feel to it. And you might not be surprised that this marginalised country throws up all kinds of fascinating stories. Here are modern dictators, the cult of Jim Jones and the Jonestown Massacre, the true story (perhaps) of Herni Charriere — or Papillon — of Devil’s Island (who seems to have been a model prisoner). El Dorado is here – yet it really is — as are many household names who come from these nations, including politicians Bernie Grant and Trevor Philips, musician Eddy Grant and football superstar Ruud Gullit.

Above all this is a story of settlement and revolution, tribal wars fermented by western powers dashed hopes and dreams and of the strange, often twilight worlds, that have been left by the differing colonial powers. Each of the three territories is, of course, very similar but we do get a fascinating feel here of how each of the three powers, the British, the Dutch and the French, have created a new framework for the land they influenced.

There seems to be little hope here for dramatic growth or an economic miracle, anther these are nations that look to have a future much dependent on foreign aid. As a result I guess most of us will have few opportunities, or fewer reasons, to visit here. Yet Gimlette’s book is enlightening in all kinds of ways.

The best kinds of travel books are a wonderful mixture of travelogue, historical account, mythical tales and fascinating encounters. You will find all of these in the Wild Coast.

Gimlette proves that there is life yet in the travel genre. A very good read.